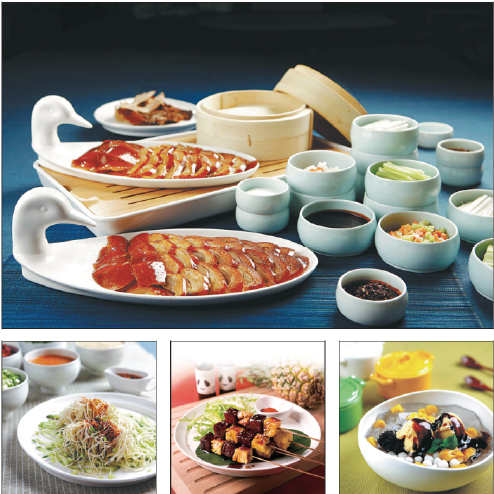 Meizhou Dongpo's signature Sichuan dishes are popular at the wine party before the La Liste 2019 awards ceremony in Paris.

Chinese cuisine enjoys unprecedented success at La Liste 2019's awards, Li Yingxue reports.Sichuan cold noodles with shredded chicken, beef in red-wine sauce, dongpo roast duck with lotus-leaflike pancakes and Sichuan-pepper lobster ... the small servings were devoured before all the guests could sample all of the dishes.The event was a wine party before the award ceremony of La Liste 2019 in Paris, where four restaurants from China, Japan, South Korea and Morocco presented delicacies from their respective countries.Meizhou Dongpo's founder, Wang Gang, led his team to introduce Chinese cuisine to the guests, most of whom are celebrated chefs from around the world. He also presented panda puppets holding bags of tea from Sichuan province.La Liste 2019 revealed its list of the 1,000 best restaurants around the world in Paris on Dec 3.The list features 134 Chinese restaurants, including 22 from Hong Kong and four from Macao-the second-largest number among the 64 participating countries. That's seven more than last year, when China surpassed France for the first time.Japan and France this year ranked No 1 and 3 with 148 and 116 restaurants, respectively.

Wang Gang presents a panda painting as a gift to France's first lady, Brigitte Macron, after a lunch in the Elysee Palace in Paris in December.

Guy Savoy from Paris has won the first place for three consecutive years. It tied with New York's Le Bernardin for first place this year.The highest-ranking Chinese restaurant is Capital at the Beijing Hong Kong Jockey Club, in the 19th spot.La Liste was founded in 2015 as the French foreign ministry's response to the UK gastronomic guide, The World's 50 Best Restaurants.The list is compiled using a data-processing algorithm.It factors in over 400 international dining guides, such crowdsourced sites as Yelp and Trip Advisor, and reviews by such media as The New York Times and The Washington Post. It also considers Michelin and other guides.Its smartphone app features over 16,000 restaurants in more than 180 countries, enabling travelers to choose restaurants that match their tastes and means, whether prestigious or modest.La Liste's co-founder, Joerg Zipprick, comments on the website that new names are popping up in La Liste 2019. Many are unknown to the media.Zipprick says a new trend is that Asian restaurants are entering the Western luxury market.Chinese, Korean and Japanese restaurants have been confined to ethnic niches and expected to be cheap for decades. Westerners were reluctant to spend big in Asian restaurants."The situation is rapidly changing," he writes."Hotel chains, such as Shangri-La, are opening Chinese luxury restaurants all over the world, teamed up with talented chefs. Da Dong in New York, Guan Fu in Flushing... set new standards for Asian restaurants where the quality and bill are in line with high-end criteria."Meizhou Dongpo's Guoancun branch ranks 10th among the Chinese restaurants on La Liste. And Wang Gang won the Entrepreneur Award that honors a chef or restaurateur who has built an empire with his concept."In 1996, at the opening of the first Meizhou Dongpo, who would have imagined that Wang Gang would not only become one of the most-prominent personalities of Chinese hospitality and catering, but that he would also become the head of an empire where the sun (almost) never sets?" La Liste says in a statement.Meizhou Dongpo has more than 150 locations worldwide, including five in Los Angeles.The committee believes the secret of Wang's success is authenticity, quality, rigorous organization and a smart pricing strategy, as Meizhou Dongpo restaurants remain affordable to the Chinese public.Wang was also invited as the representative of Chinese chefs to join 16 chefs from other countries to have a lunch in the Elysee Palace with France's first lady, Brigitte Macron, before the award ceremony."I feel that food can link the whole world," Wang says."And I notice that in France everyone-from the government to the public-respects chefs."Wang's aim is to cook Sichuan cuisine for the whole world.The visit to Paris inspired him to open his restaurant in the city. He believes French people and people from his native Sichuan province are alike-both value gastronomy and quality of life."To compete with the best chefs in the world can make us improve," Wang says."We can learn their essence and infuse it to elevate Chinese cuisine. We need to keep humble and spread Chinese cuisine."Wang's experience in the United States suggests that Chinese flavors are welcomed by Westerners but must be standardized for consistency."We need to respect local eating habits and keep the authentic Chinese flavors at the same time," Wang says."To standardize Chinese cuisine doesn't mean to cook dishes with a cold, machine-like approach but, rather, to manage chefs methodically and increase passion for Chinese cuisine and the pursuit of art during cooking."Wang's visit to Paris to take part in the La Liste award ceremony was organized by the World Federation of China Catering Industry, which sponsored the trips of 40 representatives from China and Chinese restaurants overseas.The delegation was led by WFCCI board of supervisors president Wu Li, who's also a member of La Liste's international advisory board."It's the largest group we've organized to join the ceremony, since more Chinese restaurants are listed this year," he says.The delegation also visited several Michelin-starred restaurants in France, including the winner, Guy Savoy, and wineries in Bordeaux.One of the best-known Peking duck restaurants, Quanjude, launched its Bordeaux branch at the end of November.The delegation visited the restaurant and discussed with its chefs ways to invigorate Chinese cuisine's vitality abroad."To promote Chinese cuisine in the world, we need to cultivate Chinese-cuisine chefs overseas and build a qualification system to evaluate chefs," Wu says.The award ceremony to celebrate Asian restaurants on La Liste 2019 will be held in Hong Kong later this year, Wu says.