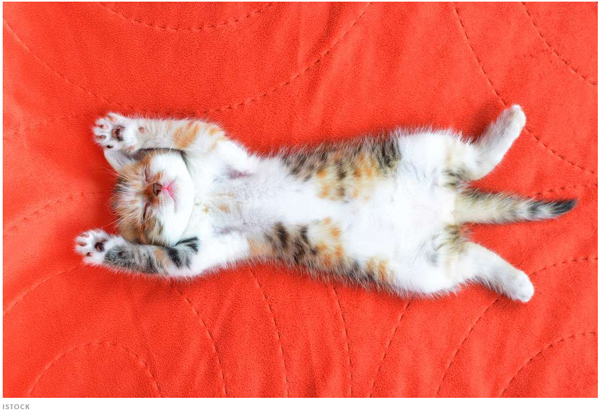 1. KEEPING TIME You might be asleep but your hypothalamus is not. It's carefully keeping time for you as part of your circadian rhythm. This not only helps you feel tired so that you go to sleep with the release of melatonin, but a protein called PER is released in the morning that gradually wakes you up, often right before your alarm clock is set to go off.2. SPOUTING OFF What do you have to say when you're asleep? Sleep-talking or somniloquy can range from random noises to complete sentences. About 5 percent of adults do it (it's slightly more common in children), and it can happen during any stage of sleep. It's most common in men and kids, and can be brought on by fever, sleep deprivation, stress, anxiety, or depression. Don't worry though—there's no evidence people tell their deepest, darkest secrets while asleep. The biggest concern may be that you're keeping your sleep partner awake.3. GRINDING YOUR TEETH Most people grind their teeth while they are asleep, at least sometimes. This habit, called bruxism, can be caused by emotional or psychological states like stress or anxiety, from an abnormal bite (misalignment of your teeth), or even from sleep apnea. Most people are unaware they do this until their dentist notices evidence of unusual wear. If you're damaging your teeth at night, your dentist can give you a mouth guard to prevent it.4. CLEARING YOUR BRAIN You think you're resting, but your brain is doing some serious housekeeping every single night. While you are asleep your brain clears out some memories and cements and reorganizes others. The brain also physically cleans itself with a flood of cerebrospinal fluid, which removes unnecessary proteins that can act as toxins.5. GETTING PARALYZED Your muscles are frozen for part of every night. It's actually normal and healthy to be paralyzed during sleep. During rapid eye movement (REM) sleep your brain is busy dreaming, but to protect yourself from responding to the dreams (for example, screaming when something scary happens or waving your arms to push away an oncoming danger in your dream), your body's muscles are paralyzed. It's possible to actually wake up during the tail end of this cycle and be awake but unable to move, which can be upsetting or even terrifying. It's also relatively common, having occurred to about 40 percent of people. These episodes usually pass quickly.6. DROPPING POUNDSYou might be conked out at night, but it turns out your body is still working hard. Each night you lose about a pound due to the water vapor you expel while breathing. You also lose weight since you're expelling carbon atoms with each exhalation. Because of this, the best number on your scale will be first thing in the morning, so take advantage of it!